Buckner Companies mobile ironworking crews build arenas, hotels, airports, and more, from coast to coast. With over 30 superintendents and 350 skilled workers, all with an individual average of over 15 years of experience each, Buckner’s people are the driving force completing difficult projects of all sizes, especially the unusual, the complex, or the mammoth.

Mark MeHaffey, CP Buckner Steel Erection Logistics Manager said, “Every day Buckner experiences a very substantial cost savings by collecting and delivering real-time IN and OUT punches. We contain rising labor costs in our totally mobile crews— and when we transfer men across state lines they simply go where they’re needed. Their clock data follows them across clocks. Those savings alone are significant, as we don’t have to chase data. We use AboutTime™ on BlackBerrys® on powerful Verizon network to ‘sync’ (electronically deliver) many hundreds of timecards each week from all over the country, all received within minutes, and all accurate to the minute.”

Jerry Cagle, Buckner’s Director of Construction, spearheaded AboutTime when he first visualized Buckner using a comprehensive electronic time and attendance system. His plan was to transmit accurate mobile workforce data from BlackBerry cell phones, and without re-keying anything, flow that data into their Sage Timberline Office accounting program. Cagle started his career with Buckner as an ironworker over 30 years ago, gradually rising to field superintendent, project manager and then senior project manager before being named Buckner’s Director of Construction. Known as a tireless worker, his innovative fingerprints can be seen on every Buckner job. He is an AWS Certified Welding Inspector, and Crane, Rigging, and Bolt Inspector, too.

“There are many integrated BlackBerry/AboutTime features that we just can’t live without,” said Project Coordinator Cory Baumberger.

“Without a doubt the greatest advantage of the BlackBerry/AboutTime combo is having real-time information all in one place, and on one device, in one hand. Our men take control of things. With one portable unit they take photos, write notes, clock in and out, get driving directions, make phone calls, see e-mails, communicate data, and more. We do virtually everything on one device, and workers who normally power down their phones after hours now communicate much later. That’s huge.”
AboutTime software utilizes and heightens most features of the BlackBerrys. “It’s hard to tell where BlackBerry features stop and AboutTime begins,” says Baumberger. “Buckner uses most of the AboutTime features such as real-time personnel SpotCheck™, Field Approval of time records, and Per Diem™ approval, etc.

“AboutTime’s Cost Code Budget™ feature saves us a fortune. Field supervisors manage their crews in real time, no matter where they’re working. Their BlackBerry dashboard shows an accurate tally of worker’s hours compared to critical cost code budgets. We balance real-time data on every project cost code against what’s happening in the field this moment. That keeps us on track for what we do today, but also enables our next estimates to be far more accurate, and more consistently profitable, too. 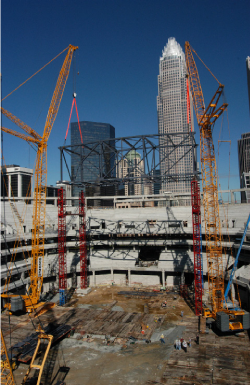 “We now know what we’re doing at any minute no matter where we’re doing it.”
Baumberger continued, “AboutTime’s JobPhotos™ feature is invaluable. Supervisors use their BlackBerry to instantly snap, send, and file jobsite photos. They exchange visual information using their BlackBerrys— not only for graphic communication, but to assemble into client’s records conditions, data, and circumstances. Previously if there was a problem on the job, someone had to drive out to see. Then supervisors carried digital cameras but had to find a computer (if there was even one onsite) to upload pictures, and to e-mail somebody and wait for a reply. Days could pass.

“With the AboutTime/BlackBerry mobile suite we immediately send the picture to the fabricator or supplier. Then we hop on the phone and say, ‘Hey, this is what we’re dealing with and we need it fixed now!’ We never leave the spot; everything’s faster.

“This integration of the Real-time data is huge. The AboutTime/BlackBerry unit keeps our remote teams alerted when storms, high wind forecasts, or anything else comes up that might affect our heavy-lift cranes. With mobile crane boom tower heights over 600 feet, we follow OSHA safety to the letter. AboutTime helps keep par with insurance and worker’s compenstation laws by allowing us to pre-program questions into the Employee Feedback Manager™, which asks every worker when they clock out such direct questions as “Were you hurt on the job?” A ‘no’ answer on Friday stops false worker’s compensation claims on Monday. The guy admitting he wasn’t hurt when he left work can’t claim we were responsible for his cut arm or kinked neck.

“AboutTime stores photos, field notes, time and attendance, and much more. The BlackBerry quickly Googles local suppliers or finds addresses, and AboutTime furnishes to the field phone numbers or addresses so we can call anyone who is MIA.

“By implementing the AboutTime/BlackBerry technology, Buckner now sees— in real time— exactly who, when, where, and precisely ‘what’ all 400+ ironworkers are doing at every moment, anywhere they work. And since they’re literally all over the map, it’s amazing to see all their data zip back to the office with a single button push. But more astounding is watching AboutTime’s integration with Sage Timberline Office.”
Mark finishes, “Lost time is never found. Money lost is never found, either. Jerry [Cagle] found lost time and recovered lost money. Despite being a lifelong ironworker he did some visionary, forward-looking research about mobile time-tracking technology, scrutinizing perhaps 15 top companies and concepts. The AboutTime and BlackBerry combo was the only serious contender for someone as large and geographically dynamic as Buckner. Jerry changed our corporate culture and kept us competitive.”